The Merge – The Most Significant Ethereum Upgrade Ever? 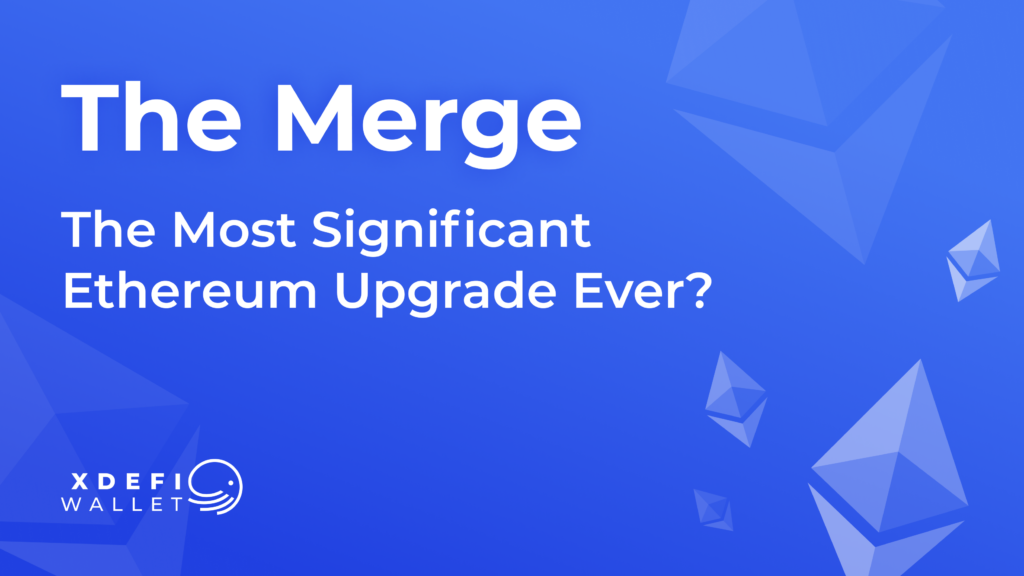 This year the Ethereum blockchain will officially switch from a proof-of-work to a proof-of-stake consensus mechanism. Technically, the PoW mainnet will ‘merge’ with the existing PoS Beacon Chain – hence the name “The Merge”. This will be the most significant blockchain upgrade for Ethereum and maybe even for the wider crypto industry.

This article explains what the Merge is and what consequences it will have for both the Ethereum network and ETH the asset.

This article has been written for XDEFI Wallet by Korpi.

A blockchain is a distributed database with many nodes that need to agree on the global state of the network (things like account balances and the order of transactions). The way in which agreement is reached is known as a consensus mechanism. The most popular types of consensus mechanisms are: proof-of-work (PoW) and proof-of-stake (PoS).

More information about PoW vs. PoS: Intro to Proof of Stake vs. Proof of Work

Ethereum, like Bitcoin, currently uses a proof-of-work (PoW) consensus mechanism. Miners compete to create blocks of transactions by solving complex mathematical problems which require powerful and energy-hungry GPUs (graphics processing units). To defraud the PoW chain, one would need 51% of the network’s computing power which would require huge investments in equipment and energy.

In a proof-of-stake (PoS) consensus mechanism, blocks are created by validators who need to stake ETH to participate in the system. If validators behave maliciously, their collateral can be destroyed – this approach replaces the energy-intensive computations of PoW. To defraud the PoS chain, one would need 51% of the total staked ETH which would eventually be slashed – this makes such an attack extremely expensive to carry out.

Why move from proof-of-work to proof-of-stake?

Although Ethereum initially launched with a PoW consensus algorithm, the vision has always been to make it a PoS network. According to ethereum.org: “Ethereum is moving off of proof-of-work to proof-of-stake because it is more secure, less energy-intensive, and better for implementing new scaling solutions.”

Ethereum wants to be an environmentally-friendly network

As explained earlier, PoS doesn’t require intensive computational work of PoW. According to many estimates, the expected energy savings from the switch to PoS will be around 99%. This is not only a huge reduction in energy consumption but also a great narrative for an increasingly environmentally-conscious world and a viable solution to one of the common criticisms facing the crypto industry. 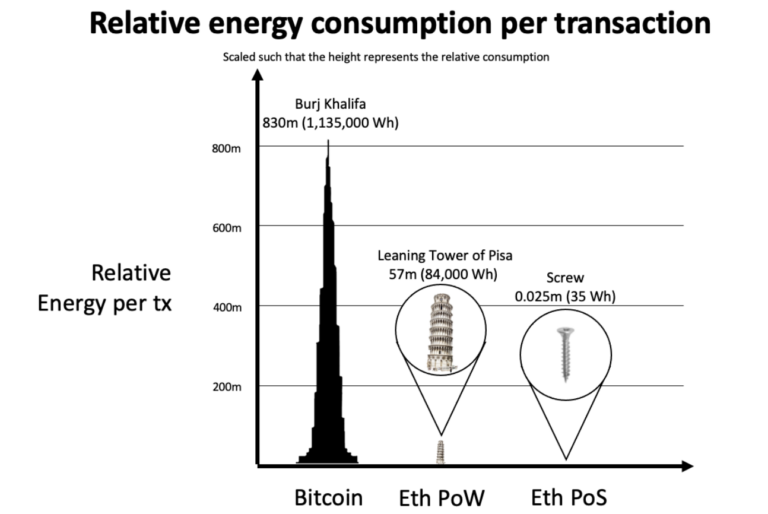 While advocates of PoW and PoS are far from agreeing on which consensus mechanism offers higher security and more decentralization, Ethereum’s vision has always been about PoS for a number of reasons:

PoS sets the stage for future scalability upgrades such as sharding.

Sharding is the process of splitting a database horizontally to spread the load. For Ethereum it means there will be multiple chains (“shards”) that will increase the number of transactions per second, therefore reducing network congestion.

PoS is the prerequisite for sharding – it enables the reliable split of network responsibilities between existing block producers which would not be possible with PoW.

What is The Merge?

There are currently two Ethereum blockchains:

Beacon Chain has been running independently from the Ethereum Mainnet since it went live in December 2020. This isolation was needed to perfect the PoS chain without putting the main chain at risk.

Once completed, the current proof-of-work algorithm on the Ethereum Mainnet will be replaced with the proof-of-stake consensus protocol that the Beacon Chain provides. The new consensus layer will merge with the existing execution layer – hence why it’s called The Merge. 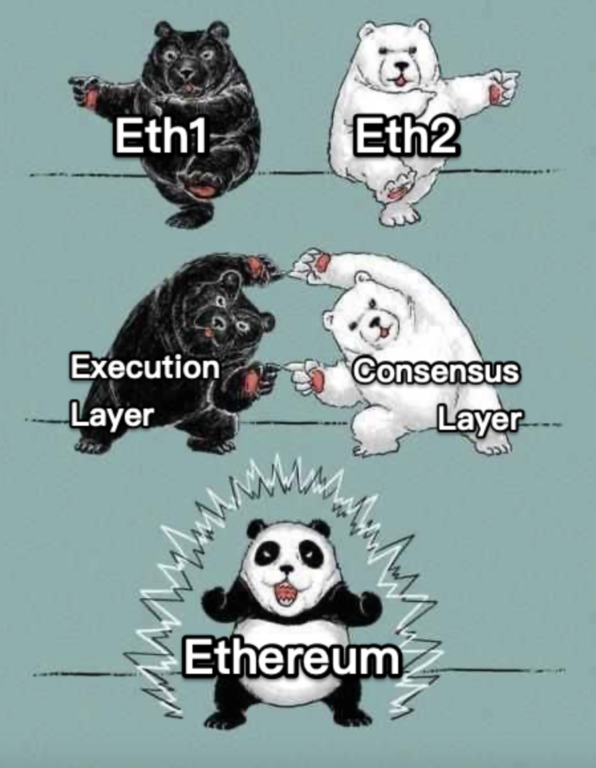 Consequences of The Merge for ETH the Asset

While the Merge has been in Ethereum’s roadmap for noble reasons that include making the chain more secure, less energy-intensive, and better for implementing new scaling solutions, it also has a lot of positive consequences for ETH the asset.

ETH will go through “Triple Halvening”

Bitcoin halving is the event that takes place every 4 years and consists in reducing the amount of BTC awarded to miners by half. It is often believed to have the most significant impact on the repetitive crypto market cycles.

If the Merge happened today, ETH issuance would be reduced by 90%! This is equivalent to three Bitcoin halvings, hence the Ethereum community has dubbed it the “Triple Halvening”.

While ETH issuance reduction is an undeniable fact enabled by the PoS security efficiencies, the exact percentage reduction can only be estimated at the moment. The amount of ETH that will be issued in PoS is dependent on the amount of ETH staked.

Currently, with almost 12.9M ETH staked on the Beacon Chain, validators receive nearly 1600 ETH every day in block rewards. This corresponds to less than 0.5% of annual inflation. When we compare it with the issuance rate in PoW which is about 4.5%, we get a 90% reduction, i.e. the “Triple Halvening”. 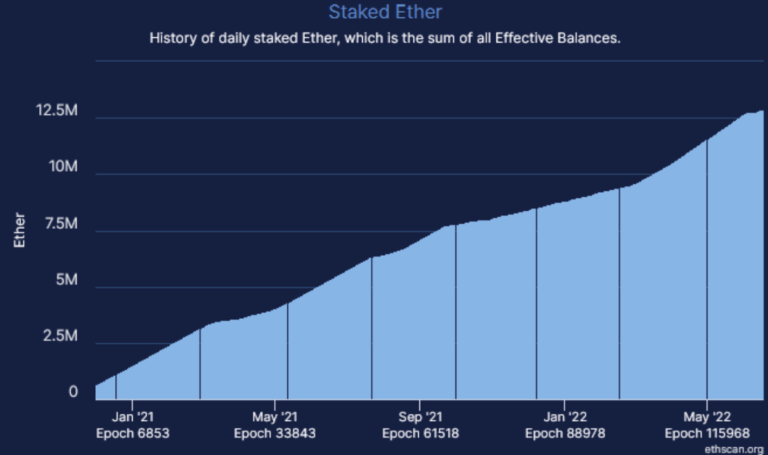 Figure 3: The amount of staked ETH on the Beacon Chain
Source: https://ethscan.org/charts

However, when the amount of staked ETH goes up, so does the issuance. It’s not a linear relation though. If staked ETH doubles to 25.8M ETH, the issuance rate will increase to ~0.7% (40% increase from 0.5%). In such a case the “Triple Halvening” term may be slightly overstated but it doesn’t change the fact that the switch to PoS leads to a dramatic reduction in ETH issuance when compared to PoW. The “Triple Halvening” is just a catchy term to make it memorable.

ETH will become a productive asset

In both PoW and PoS block producers are rewarded by the protocol with ETH issuance. The difference between these two consensus mechanisms is that in PoW ETH rewards go to miners while in PoS they go to validators who are required to stake ETH. In other words, staking ETH to secure the network enables you to earn ETH rewards. PoS transforms ETH into a productive asset.

Currently, when 12.9M ETH is staked on the Beacon Chain the staking APR is around 4.6%. The more ETH that is staked, the lower the APR becomes because total issuance doesn’t grow linearly with the amount of staked ETH. This yield comes only from ETH rewards for producing blocks but there is one more yield component that will be enabled after the Merge – the unburned fee revenue.

As per EIP-1559, a portion of the transaction fees on Ethereum is burned (base fee) and the (unburnt) rest goes to the block producers (priority fee or tip). In PoW all the tips are received by miners but after the Merge they will go to validators which will increase the APR for staking ETH. If the activity on Ethereum in the future is comparable to what we have experienced since EIP-1559 went live in August 2021 and the amount of staked ETH is flat, the staking APR will grow to c.8-9%. ETH will become even more productive.

ETH will transform into a deflationary asset

ETH doesn’t have a capped supply which is often pointed out as a flaw, especially by advocates of BTC fixed supply. The Ethereum community believes it’s not a bug but a feature because ETH issuance is a security budget which shouldn’t have any arbitrary cap. By Ethereum’s vision, the security of the network should always be guaranteed while asset inflation can be overcome in a different way.

As mentioned before, a portion of the transaction fees on Ethereum is burned. Since August 2021, almost 2.5M ETH has been burned (i.e. removed from the supply forever). The burn creates an interesting dynamic for the Ethereum network and ETH the asset.

If more ETH is burned than issued, ETH becomes a deflationary asset – its total supply, although uncapped, shrinks while the rewards for block producers can be issued in perpetuity. This is the ideal design for a blockchain – the security is guaranteed through unrestricted issuance and the native asset is not diluted by inflation.

Although a lot of ETH has been burned to date, it hasn’t offset the high issuance in PoW. Annual issuance of 4.5% means around 5.5M ETH enters the circulation per year while the annualized burn is about 2.8M. This sets the supply growth at c.2.2% per year.

The outcome changes dramatically with the reduced issuance in PoS. With 12.9M ETH staked, annual issuance drops to less then 0.6M ETH which makes the supply growth negative at -1.9%. The Merge transforms ETH into a deflationary asset without risking the security of the network in the future.

Common Misconceptions About The Merge

The long-awaited switch from PoW to PoS has been the subject of many myths. The most common ones concern the supposed reduction in transaction fees and ETH unlocks from the staking contract after the Merge. What is the truth?

The Merge will not reduce transaction fees

The scope of the Merge is to switch from PoW to PoS. The network won’t be taken down to conduct the upgrade so it’s almost like changing an aeroplane engine mid-flight. To limit the complexity of this already ambitious endeavour, additional features are reduced to the necessary minimum. Therefore, the Merge does nothing to improve the scalability of Ethereum and won’t impact the cost of transactions when successfully completed.

Anyone disappointed with the fact that fees won’t go down after the Merge should remember that PoS is a prerequisite for future scalability improvements like sharding. Moreover, the boom of layer 2 solutions is scaling Ethereum now by expanding its scope beyond the Mainnet without compromising on security or decentralization. Layer 2s make Ethereum affordable even now and more scalability improvements are already being worked on.

Staked ETH will not be immediately unlocked after the Merge

When staking ETH on the Beacon Chain began back in November 2020, it was clear that withdrawals wouldn’t be enabled for a long time. Many wrongly assumed that the successful Merge would unlock all the staked ETH and would flood the market leading to an inevitable price drop.

For the same reason that The Merge will not reduce gas fees on Ethereum, i.e. reduction of complexity of this upgrade, withdrawing staked ETH will not be enabled. This feature is planned for the “cleanup” upgrade that is expected to happen following the completion of The Merge. Disabled withdrawals also mean that block rewards will not enter the market while the network will still be burning ETH due to EIP-1559. This potential supply crunch will probably last at least 6 months until the next upgrade will be ready for implementation.

When withdrawals are finally enabled, there is unlikely to be a single massive inflow of unstaked ETH into the market. To withdraw ETH, a validator must exit the active validator set but there is a limit to how many validators can exit per epoch. Therefore, unlocked ETH will enter the market slowly.

As the transition to PoS has been on Ethereum’s roadmap since its earliest days and it has already taken years of research and development to prepare for this upgrade, many people are questioning if it will ever happen. However, there is strong evidence suggesting that The Merge will take place in Q3/Q4 this year.

On 8 June 2022, the Ethereum network completed a merge test run on the Ropsten test net and it was a major success. This was the first of the public test net merges that can be considered as the final “dress-rehearsals” before the main event – The Merge on the Mainnet.

The Merge is indeed coming and it’s coming soon.

This article has been written for XDEFI Wallet by Korpi.