Scaling DeFi to The Next Level – How Fantom Keeps Growing 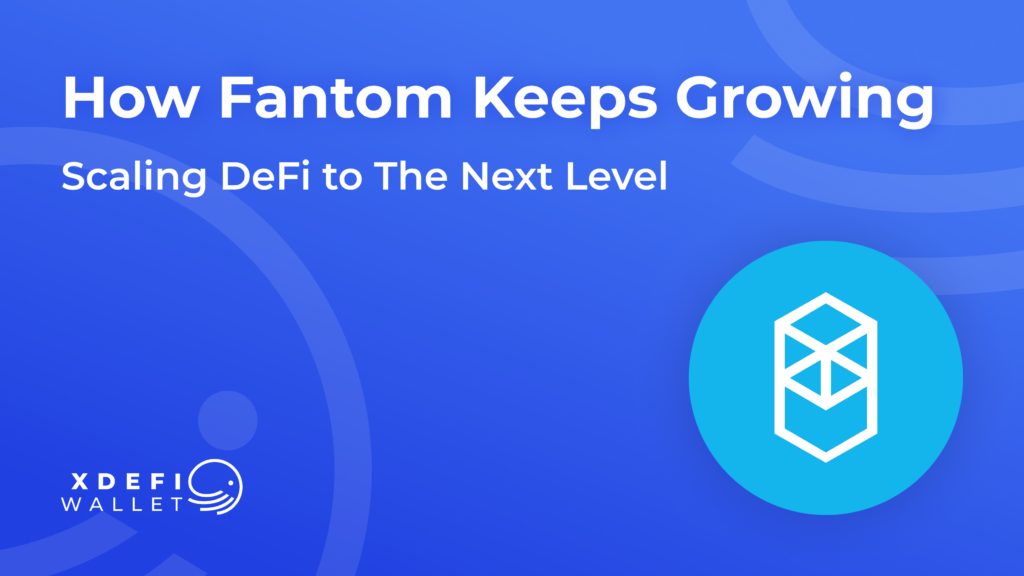 XDEFI Wallet has added support for Fantom, an EVM-compatible Layer-1 blockchain competing with Ethereum. Fantom is not only running on an advanced technology stack but it is also demonstrating signs of a vibrant DeFi (Decentralised Finance) ecosystem. So let us look at how Fantom has become one of the most promising challengers to Ethereum.

Fantom is designed as a next-generation, smart contract platform to go beyond the ground-breaking invention of Bitcoin and Ethereum by tackling the so-called blockchain dilemma to balance speed, security, and decentralisation.

Fantom uses a set of different mechanisms and technologies that do not sacrifice security and decentralisation in favour of scalability, as other projects do. Fantom operates a modular architecture that allows for complete customisation. The core pieces are a Directed Acyclic Graph (DAG) model with the Opera mainnet, the Lachesis Consensus Algorithm (LCA), and ultimately, the Fantom Virtual Machine (FVM). However, before we dive deeper into the technological details, let us start with Fantom’s history.

The history of Fantom

Computer scientist Dr. Ahn Byung Ik founded Fantom in 2018. Before founding Fantom, Ahn served as president of the Korea Foodtech Association. “I felt the need to develop a new infrastructure technology that can apply blockchain across the whole society beyond cryptocurrency and finance,” said the founder. Since February 2019, the Fantom Foundation has taken care of developing the blockchain under the direction of Chief Executive Officer Michael Kong.

With the launch of the FTM token in mid-June 2018, Fantom started to receive more attention. The launch was a traditional initial coin offering (ICO). The team raised US$40 million for the project by selling 40% of the total token supply with a token price of around US$0.03 (a total supply of 3.175 billion tokens). Since then, the Foundation has not disclosed any additional funding rounds. Approximately 18 months later, Fantom’s mainnet Opera was launched on 27 December 2019.

The $FTM token experienced a first major price increase during the Bitcoin rally in early 2021. However, it underwent an actual break-out after the summer of 2021 when more emerging layer-1 blockchains started challenging Ethereum. This run correlated strongly with the first Fantom Incentive Program, which launched on 30 August 2021. The Fantom Foundation committed 370,000,000 FTM to the program to increase the variety of projects in the Fantom Ecosystem, specialising in DeFi, Gaming, NFTs, education, and blockchain architecture.

In March 2022, an additional 335 million $FTM were added to the program. However, this couldn’t stop the decline of the Fantom evaluation with the whole crypto market. Since the all-time high of US$3.48 in October 2021, $FTM has dropped to just US$0.30 today. This sharp deterioration coincided with the news of Andre Cronje leaving the Fantom Foundation. Andre, one of the most influential persons in DeFi, was Chairman of the network’s Technical Council from 2018 to 2019 before serving as a technical advisor to Fantom until March 2022. As technical advisor, he helped promote Fantom’s multi-chain efforts, such as launching Fantom’s bridge to Ethereum. Nevertheless, Fantom as a grown-up ecosystem continues to expand following his departure.

As mentioned above, fundamentally Fantom uses two technologies that distinguish it as a layer 1: the Directed Acyclic Graph (DAG) model with the Opera mainnet and the Lachesis Consensus Algorithm (LCA). DAG allows fast validation of transactions while LCA provides security to the multiple chains deployed within the ecosystem.

Yes, you got it right. Fantom creates an entirely new blockchain for each deployed smart contract, boosting interoperability and fostering scalability as these blockchains act differently within the network. They are, however, connected using the same consensus algorithm, LCA. In other words, participants have the liberty to process commands at different times and play an equally important role in the production of a block.

Unlike most of the known blockchain projects, Fantom is not using block-based distributed ledgers. Instead, Fantom uses a model based on the Directed Acyclic Graph (DAG) to address scalability issues.

The Opera-Chain is the core module of Fantom infrastructure to address the scalability issues facing the traditional blockchain models. Opera uses Scala, a functional programming language, to generate bytecode on the network. Opera has three sub-layers and is EVM-enabled to deploy Ethereum smart contracts. The Core layer processes transactions, the Ware layer for smart contracts and API, and the Application layer for third-party applications. Opera runs as a Proof-of-Stake (PoS) network whose validator set uses LCA to validate transactions and produce new blocks.

According to the Fantom Foundation, the Lachesis Consensus Algorithm has four main benefits. First, it is asynchronous; thus, participants have the freedom to process commands at different times. Second, Lachesis is fully decentralised and leaderless. No participant plays a leading role in block production. Third, Lachesis is secure due to the asynchronous Byzantine fault tolerance providing reliable information even when some nodes act maliciously. And last but not least, it boasts almost instant finality with a transaction time of 1-2 seconds.

The main idea behind this consensus model is to use graphs and event blocks. Each event block contains information about transactions, smart contracts, and previous events. Moreover, it saves the signature of the user who created the event. Under such a model, LCA creates a graph, which essentially links event blocks. Finally, the leading chain Opera verifies the order of the transactions in DAG. In other words, Fantom has implemented Lachesis as a consensus layer that can extend to additional layers within the system, which is how the asynchronous Byzantine Fault Tolerance (aBFT) works.

In order to use the DAG and LCA technology to its max capabilities, Fantom is preparing for a significant upgrade that upgrades Opera from EVM to its own virtual machine, Fantom Virtual Machine (FVM). The network currently uses the EVM to ensure compatibility. The next significant upgrade aims to increase performance via parallel throughput processing, thus avoiding the EVM’s limitations.

The future of the Fantom ecosystem

All in all, Fantom shows that it has the technology to bring DeFi to the next level. While the crypto space is cooling down, it will be crucial to see which DeFi ecosystem will grow and show resilience to enable actual mainstream adoption. Our next article will dive deeper into the dApp ecosystem built on Fantom, highlighting the most vital protocols, total value locked, and more.

XDEFI Wallet’s goal is to become the number #1 multi-chain wallet for all DeFi users and NFT collectors. Therefore we need to support all major blockchain networks and their native Web 3 projects. The addition of Fantome as one of the multiple supported blockchains on XDEFI Wallet was a logical consequence of its success and the consequent high user demand.

XDEFI Wallet users can now interact with all Fantom protocols and store, send, manage, and receive FTM and all native Fantom tokens and NFTs.