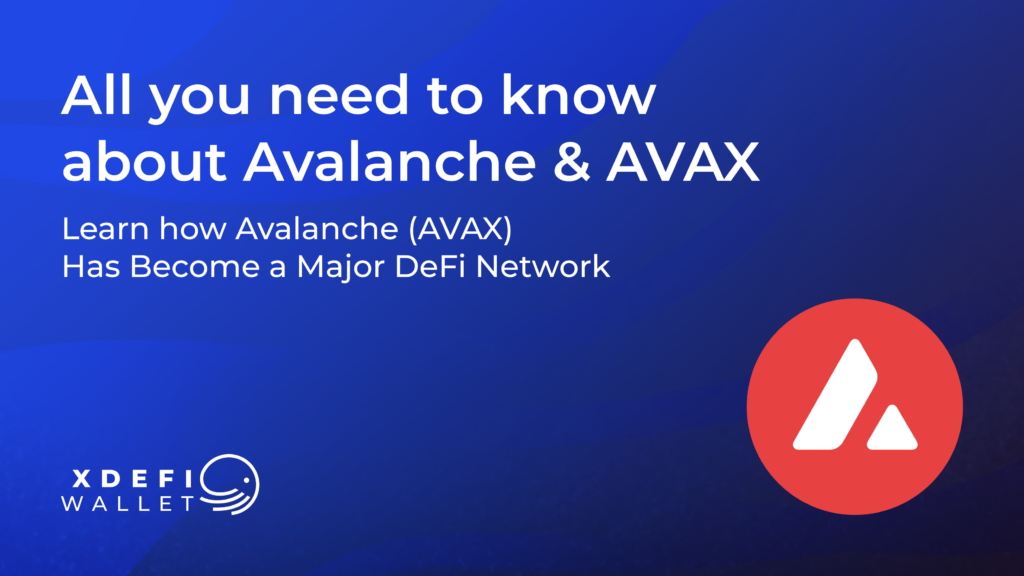 XDEFI Wallet is now supporting the Avalanche network, letting users manage and store AVAX and all native Avalanche tokens and NFTs as well as connect to all Web 3 protocols available on the Avalanche.

Despite being a relatively new project – Avalanche was launched in  2020 – it quickly became one of the essential platforms for DeFi (Decentralised Finance) applications and NFT (non-fungible tokens) projects. The total value locked (TVL) across its DeFi protocols accounts for $11 billion at the time of writing.

The History of the Avalanche Network

Avalanche was founded in 2019 by Dr Emin Gun Sirer – a former professor at Cornell University and now Founder and CEO at Avalanche Labs – and his team to create a scalable blockchain with the fastest “time-to-finality”. (Emin Gun Sirer’s Twitter profile) 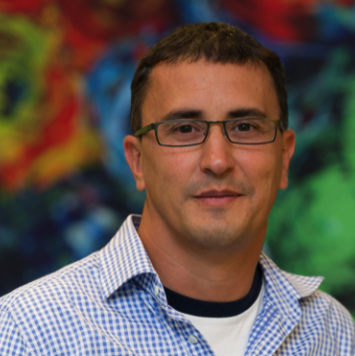 The team behind Avalanche Labs came up with its own consensus algorithm called “Snowflake”, which can achieve near-certain finality (time to finality is how long it takes for a crypto transaction to process and be considered permanent and irreversible) in less than a second. As you can see with the “Snowflake” algorithm and the name Avalanche itself, the project’s branding and naming for some aspects of the Avalanche network are all entered around snow. 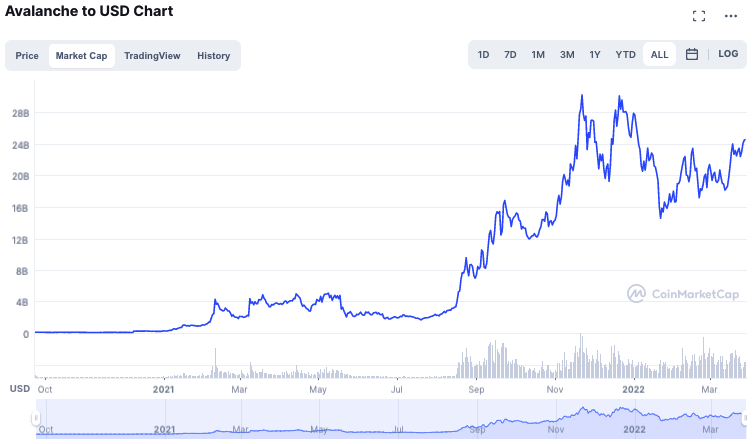 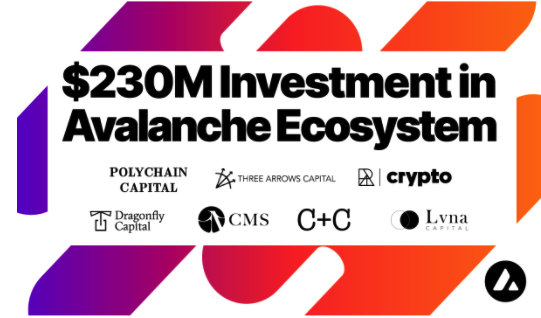 Avalanche was created as an open-source platform for launching decentralized applications and enterprise blockchain deployments. It also tries to solve one of the toughest challenges in the blockchain space, achieving a high level of scalability without sacrificing security and decentralization.

One of the key differences compared to well-known competitors such as Ethereum is Avalanche’s unique consensus protocol, called “Snowman”. The Snowman consensus protocol works based on sub-sampled voting, which means that not all network validators need to confirm every transaction, but only a randomized subset of validators does. 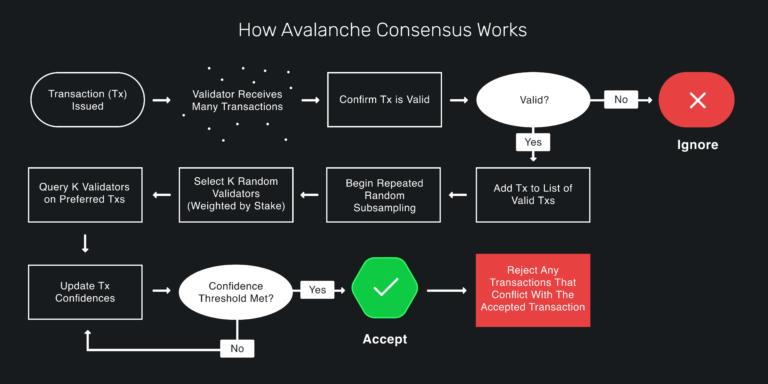 Another unique selling point of Avalanche is that it consists of three different blockchains rather than only one. Each of the three chains specialises in specific tasks, allowing the overarching Avalanche platform to support fast, low-cost transactions while still offering reliable security and a  high level of decentralisation. 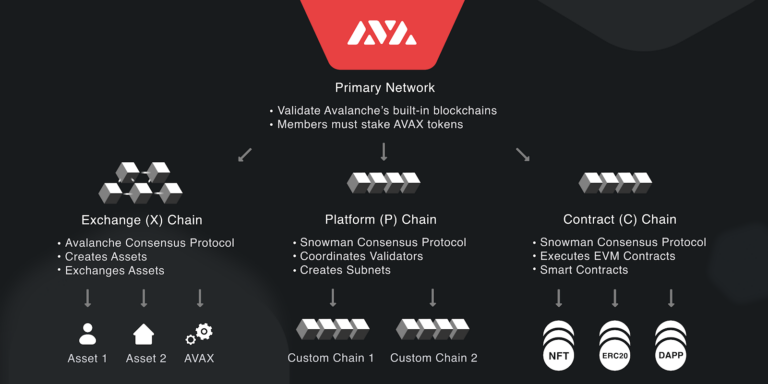 Let us break down the three different blockchains within the Avalanche network and their functions:

1) Exchange Chain (X-Chain): The X-Chain offers a decentralised platform to create and trade digital assets. These assets include Avalanche’s native asset $AVAX and protocol tokens like $JOE or $PTP. All transaction fees are denominated in $AVAX.

2) Platform Chain (P-Chain): The P-Chain is Avalanche’s metadata blockchain and coordinates validators, tracks existing subnets, and allows the creation of new additional subnets (which will be explained below in more detail).

Create Your Own Subnet on Avalanche

As mentioned above, Avalanche’s P-Chain allows everyone to create their own “subnet” on the Avalanche network in a permissionless way. A subnet is a dynamic set of validators working together to achieve consensus on the state of one or multiple public or private blockchains.

Creating custom subnets is a powerful functionality of Avalanche, which sets it apart from many of its rivals. Subnets can be created on-demand and utilised to increase the overall scalability of the network (e.g. a volume-intensive blockchain game could run on its own subnet) or to realise specific use cases, like enterprise applications.

Thanks to its unique consensus model and reliance on three different blockchains, Avalanche features some of the most impressive performance numbers in the blockchain space regarding throughput, speed and transaction fees.

With up to 4.500 transactions per second and time-to-finality of 3 seconds, Avalanche is much more scalable than existing blockchains, such as Bitcoin, Ethereum or even Polkadot. Avalanche’s network efficiency also makes it much more economically friendly than many of its rivals, which became more and more critical in recent months. 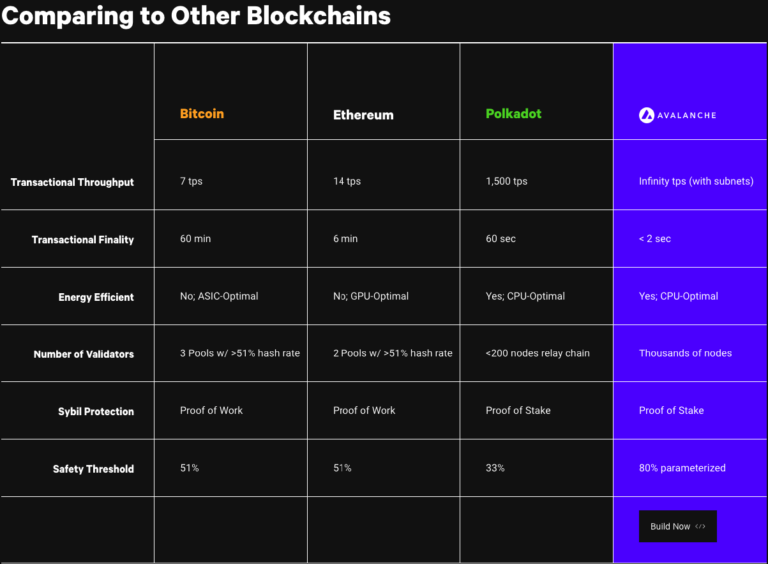 Since 2020, Decentralised Finance (DeFi) protocols have been the number one use case for smart contracts. The amount of money locked in DeFi-related on-chain contracts rose to more than $200 billion today.

As Avalanche’s primary use case – next to creating individual subnets – is to offer a decentralised platform to deploy fast and cheap smart contracts, DeFi also played a significant role in the network’s overall growth.

Thanks to the speed and efficiency of Avalanche and the above-mentioned aggressive ecosystem growth program – and only after less than two years of existence – Avalanche hosts now more than 180 different protocols with a combined value locked of $11 billion. This metric makes it one of the top five DeFi platforms.

In the following chapter, we will have a quick look at the biggest DeFi protocols available on Avalanche today.

Description:  Aave is the world’s biggest money market protocol allowing users to earn interest, borrow assets and build applications on top of it in a permissionless way. 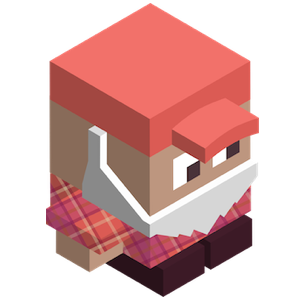 Description: Trader Joe is the number one decentralized trading platform (DEX) on the Avalanche network.

Description: BENQI is a non-custodial liquidity market protocol, built on Avalanche. The protocol enables users to lend, borrow, and earn interest with their digital assets.

Description: Yield Yak is an easy-to-use tool to earn more yield from DeFi farming on the Avalanche network.

AVAX is Avalanche’s native network asset and acts as a utility token that serves as the ecosystem’s common medium of exchange. The capped supply of AVAX is 720 million tokens, with half of these tokens created at the network launch event. As Avalanche uses a custom Proof-of-Stake mechanism to secure the network, the AVAX token can be staked for governance purposes and to benefit from the system’s staking rewards. As the token supply is capped and all network fees are burned, AVAX will become a deflationary asset in the long term. 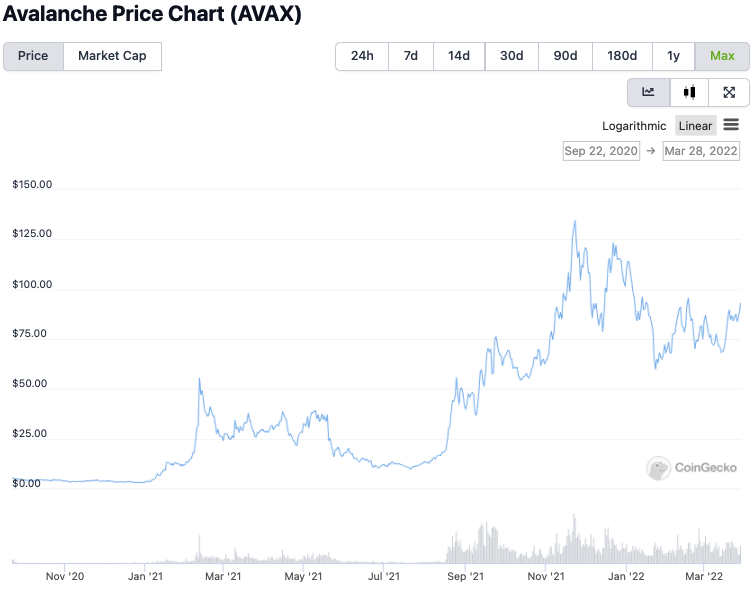 XDEFI Wallet Supports the Avalanche Network and the AVAX Token

XDEFI Wallet’s goal is to become the number #1 multi-chain wallet for all DeFi users and NFT collectors. Therefore we need to support all major blockchain networks and their native Web 3 projects. The addition of Avalanche as one of the multiple supported blockchains on XDEFI Wallet was a logical consequence of its success and the consequent high user demand.

XDEFI Wallet users can now interact with all Avalanche protocols and store, send, manage, and receive AVAX and all native Avalanche tokens and NFTs.