What are cross-chain bridges and how do I use them?

Why do we need bridges in DeFi?

In the last two years, Decentralised Finance (DeFi) has taken the world by storm and had a lasting effect on the whole crypto landscape. The composability of individual blockchain protocols and assets has become a significant growth driver and enabled a lot of innovation, and gave birth to then-new dApp categories such as yield aggregators or index protocols.

Suddenly, crypto users do not only want to store their digital assets securely, but they also want to use them in the most effective way to generate yield returns and further grow their portfolios.

At the same time, multiple smart contract platforms such as Terra, Solana, Avalanche, Fantom and others have risen in popularity and attracted a significant amount of developers, projects, capital and users. Meanwhile, Ethereum’s scalability issues have led to the creation of multiple side chains and layer two networks (such as Polygon, Ronin, Arbitrum or Optimism) which have further fuelled the fragmentation between networks.

But blockchains are, by definition, self-contained ecosystems, and this characteristic underpins the security of this technology. This leads to a conflicting situation. DeFi users don’t want to be locked into a single network but instead explore an interconnected world of opportunities, even if they have to consistently switch between multiple networks.

Based on this user need, interoperability became one of the biggest trends in the crypto space. Dozens of projects are currently trying to build or grow highly interoperable blockchains or infrastructure layers (e.g. Polkadot, Avalanche, Composable or Layer0). In the case of IBC (Inter-Blockchain Communication Protocol), all Tendermint-based blockchains can exchange data between each other, allowing for real cross-chain applications.

But for now – as long as these solutions are not fully functional, restricted in their reach or are too complicated – cross-chain bridges are the go-to solution for DeFi users. Bridges connect different blockchains or a layer one blockchain, such as Ethereum, to its side chains or layer two networks, allowing users to move digital assets from one chain to another.

When we look at the functionality of decentralised bridges in more detail, we can see that they don’t allow users to “send” assets across blockchains. Instead, they use a two-stage process involving smart contracts, where funds are locked (or “frozen”) on the originating blockchain, and the same amount of tokens is then created on the destination blockchain. This simple process shall prevent the asset from being used in any way on both chains simultaneously.

Different mechanics are used to achieve the same goal in cases where this is impossible, like on Bitcoin, which doesn’t support smart contracts. An example of this is the Ren Virtual Machine, where a decentralised network of nodes enables the network to lock digital assets on a blockchain and consequently mint the equivalent tokens on another chain.

Next to decentralised bridges, there exist also more trust-based solutions where a centralised custodian stores and mints the respective tokens. The best example is wrapped Bitcoin (wBTC), which allows using Bitcoin as collateral on various Ethereum-based DeFi protocols and relies on BitGo as custodian. 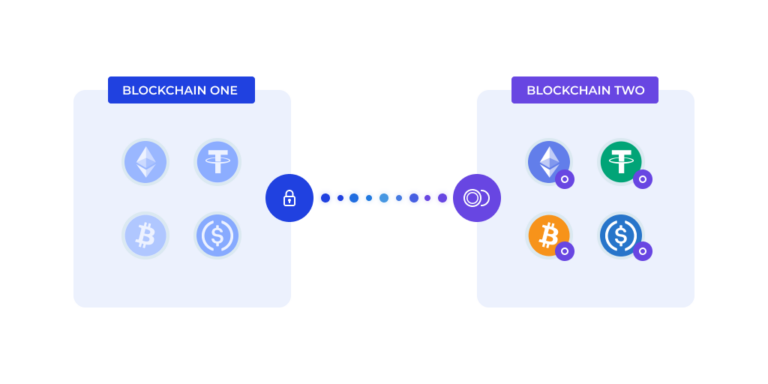 The basic bridging process involves the locking and minting of assets on two blockchains.

Some of the most important DeFi bridges

Cross-chain bridges have seen rising inflows since last year. Their usage can easily be quantified by the popular TVL (total value locked) metric, which shows how much capital is locked in the bridge because it has been frozen on one chain and created on another chain. Meanwhile, more than $20b are locked in Ethereum-based bridges alone, as you can see in the below graph by @Eliasimos created on Dune Analytics.

Based on this comparison, the most critical bridges measured in TVL are currently the Avalanche bridge, Polygon bridge, Fantom Anyswap bridge, Ronin bridge and Arbitrum bridge, with more than $1b in value locked in each of them.

On top of that, there exist other popular bridges between other networks, such as the Terra Bridge or Wormhole’s Portalbridge; the latter alone accounts for more than $2b alone.

The below infographic by DecentralizedFinance.com also shows a good overview over the most popular bridges in 2022. 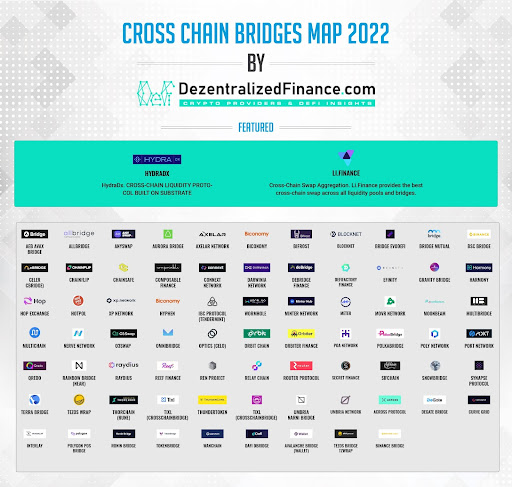 As mentioned above, the self-containment of blockchains is a fundamental pillar of their security claim. Bridges are eroding this pillar by opening up these silos. Cross-chain bridges themselves have to develop competitive security models to ensure the safety of the funds locked in them. Additionally, many bridges are relatively new, and in some cases, their security practices and level of decentralisation have been called into question.

It’s not by chance that some of the most considerable exploits we have witnessed in the recent months have hit bridges, such as the $600M hack of Poly Network or the $375M exploit of Wormhole bridge in February 2022. Also, other bridges like Chainswap or AnySwap have been the victims of hacker attacks.

Also, Vitalik Buterin, the co-founder of Ethereum, recently pointed at the limitations of cross-chain bridges in an intensively discussed post on Reddit (link: vbuterin comments on AMA We are the EF’s Research Team (Pt. 7: 07 January 2022)) and also hinted at a multiplied risk by new interdependencies that are introduced by bridging several blockchains with each other.

It is essential to keep in mind that the features and the underlying technology behind most cross-chain bridges are still in the early stages and that funds locked in bridges can get lost forever. You need to conduct your own research and understand the potential risks before using any of these solutions.

To better understand the basic workflow of a cross-chain bridge, let us look at a concrete example. In our example, we want to bridge the $XDEFI token from Ethereum to the Terra blockchain using Wormhole’s Portalbridge.

In a first step, we need to define the originating blockchain and the destination blockchain; in this case, we set Ethereum as the source and Terra as the target.

Secondly, we need to connect one or multiple wallets that support the chosen blockchains; using XDEFI Wallet makes this easy as it already supports both chains.

In the next step, we need to select the token we want to bridge, in this case, $XDEFI, by entering its handle or Ethereum contract address. 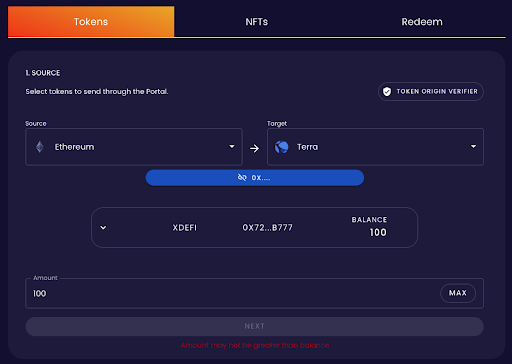 We can now initiate the “transfer process” and need to undergo the necessary token approvals. 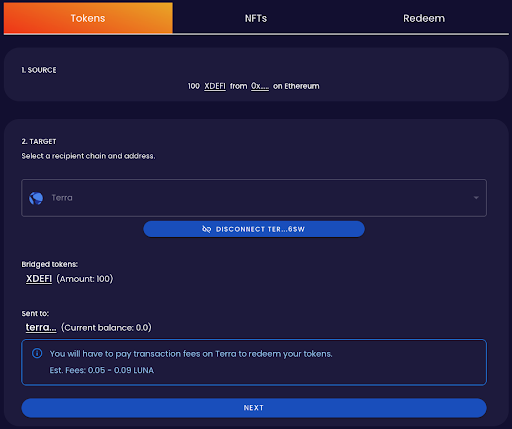 In the fourth and final step, we can redeem our tokens on the destination blockchain.